Drying vegetables is one of the oldest techniques used to preserve vegetables for a long duration of time. The principle behind preservation by drying is to reduce the moisture content from fresh vegetables to a level where microorganisms such as bacteria, mold, and yeast are unable to grow and spoil the vegetable. Solar drying is the oldest method, and many new advanced technologies are being used in the dried vegetable market. With the use of modern technology, dried vegetables have better flavor, color, aroma, acceptability, and rehydration. High quality dried vegetables have less than 10% moisture content, the absence of defects, and fast rehydration ability. Commonly available dried vegetables are carrots, tomatoes, potatoes, mushrooms, peas, and others. Dried vegetable are extensively used in food manufacturing companies, and used in the manufacturing of tomato ketchup, chutneys, sauces, salads, pickles, meat sausages, masala bread, breakfast foods, and evening snacks. 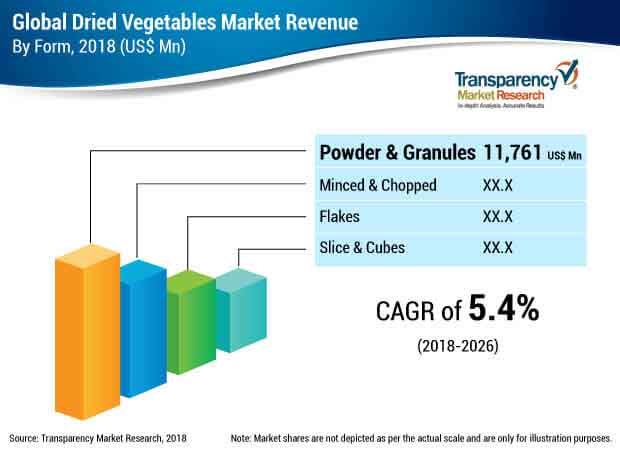 On the other hand, the approval of regulatory authorities has also opened the doors for dried vegetable manufacturers who have analyzed the capacity of this enterprise and have begun the delivery of the latest trending products. Companies such as Olam International, Symrise AG, Mercer Foods, LLC, and others have been producing dried vegetables from the past many years. Many new players are emerging in developing countries, after analyzing the future scope of the flourishing dried vegetable market.